Posted by Marc Spess at 9:08 PM No comments: 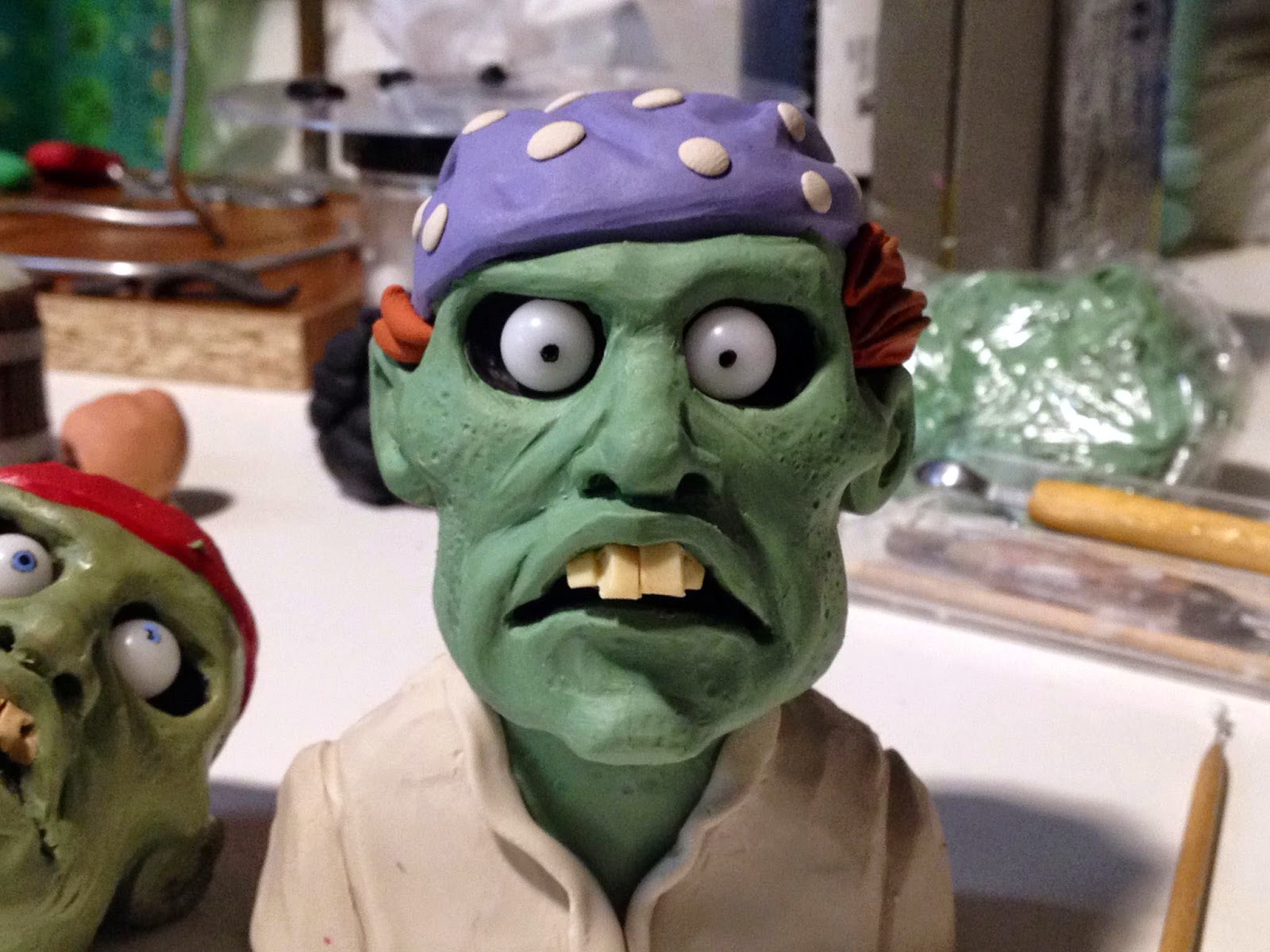 Technically zombies are resurrected people who have died. I'm not sure what you call a zombie puppet that is dead because he was ruined while making a mold. This zombie is just that! You might recognize him, but in fact the original (seen to his left) was mangled when I made a mold of him.

I call him the "Octo" zombie because he was going to have an octopus arm as part of the original story. For the first episode, he will only be seen peeking over the back of the ship. He won't be seen from the neck down, so adding his octopus arm won't be necessary. It's kind of funny how he was the first zombie I made and will be part of the last shots in the 11 year journey it's taken to complete the project.

Some more things were completed, such as moving the set around for the next three scenes and roughly setting up Ruble and Shimbu the monk. I will need to set things up properly once the camera is in place.The lighting was also reversed since we're filming the other side of the ship....even though the camera is still in the same place in the garage.
Posted by Marc Spess at 2:14 PM No comments:

Ruble has now lept for love that only he can truly feel deep inside his plasticine mind. That means that all shots are completed for the particular camera angle and side of the ship you see below. Just three  main shots remain where Ruble looks towards the camera.

I'll need to set up the lighting in reverse and slide the other side of the ship into place. The next shots will be the most expressive shots of Ruble. Facial animations and drinking his fish beer should bring fun challenges that will have to be over-come.

After that I will need to animate flying debris for the crash shots and a main replacement heart scene. The good news is I think I can complete all these shots before the end of this month. 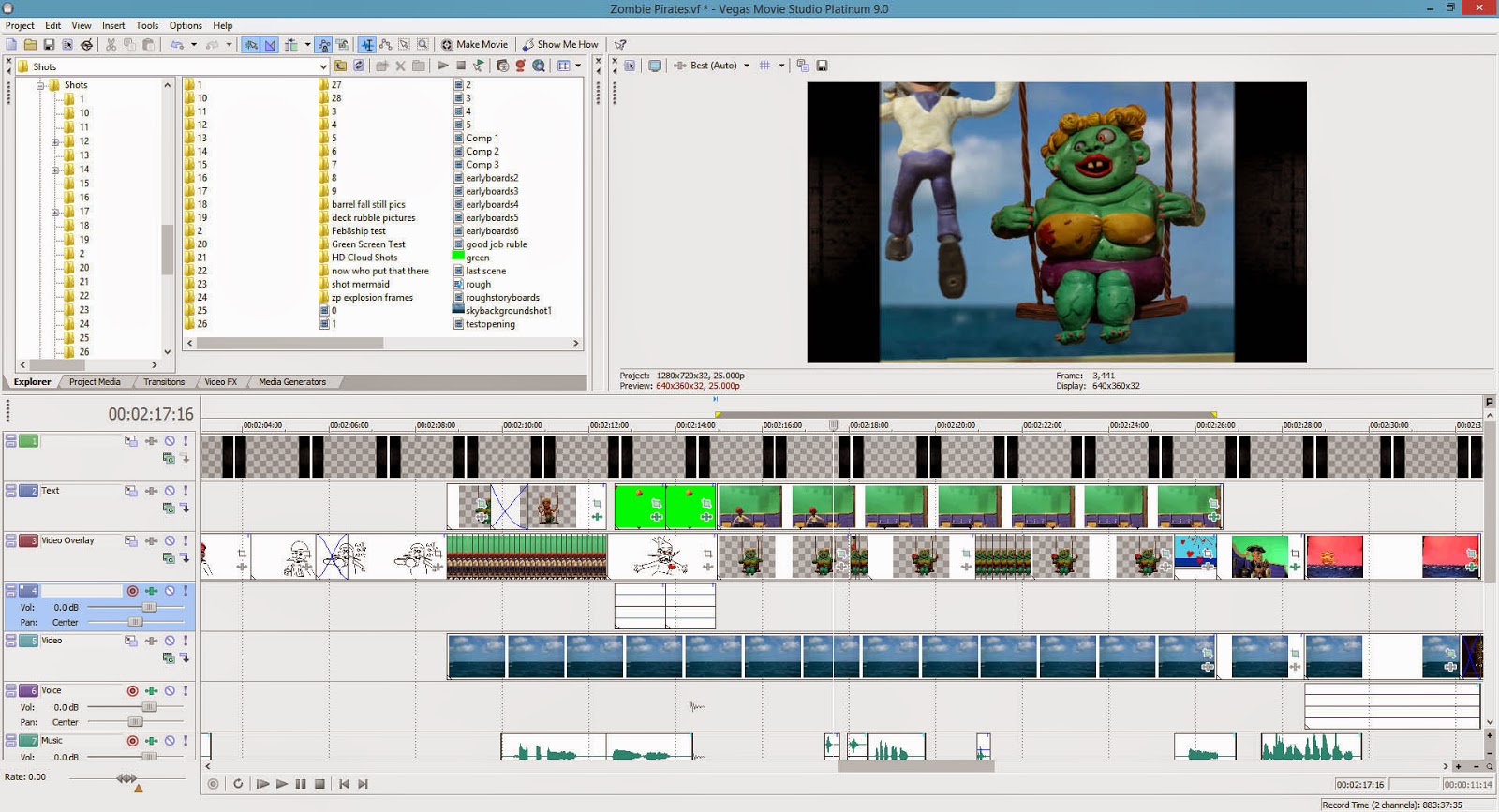 Posted by Marc Spess at 1:36 PM No comments:

What happens when Ruble unties the last rope? The large zombie woman creeps slowly down from above. This shot was around 15 seconds long - one of the longest shots in the film.

Some of the problems I encountered were that the foam latex which is naturally rubbery wanted to bend the arms into their original positions. If you think of a rubber band stretching, it will always try to go back into shape. And yes - Rubles body is made of rubber and behaves similarly.

That isn't the case usually with foam latex puppets. The issue stemmed from Rubles armature which was epoxied together. The heat from the baking process (for some unknown reason) caused the epoxy to weaken and no longer attach the parts with any strength. The worst area is his left shoulder. Fixing it is not a simple task and I've already cut him opened and added fresh epoxy to several areas already.

The good news is I've got only one more shot left to do with this puppet. Ruble will jump into the air and fly above the zombie and land on her back. I won't need any precise movements to do that shot so the arm won't be too much of an issue.
Posted by Marc Spess at 4:42 PM No comments:

One of the problems with the orange screen was the outline around the puppets. This was solved by erasing the orange in Photoshop, creating a transparent background on each image. No chroma key necessary. The results are great, but the animation is slightly limited to plopping these images in without any motion (the mermaid). Or where I animated the fat zombie (with Ruble attached), the animation was only a few frames and some blinks. It is actually fine because there wasn't a lot of movement in the mermaid or zombie scenes. Animating the swing using key frames in Sony Vegas worked out great! Also the scene is in layers where Ruble will be animated and put in the shot later. 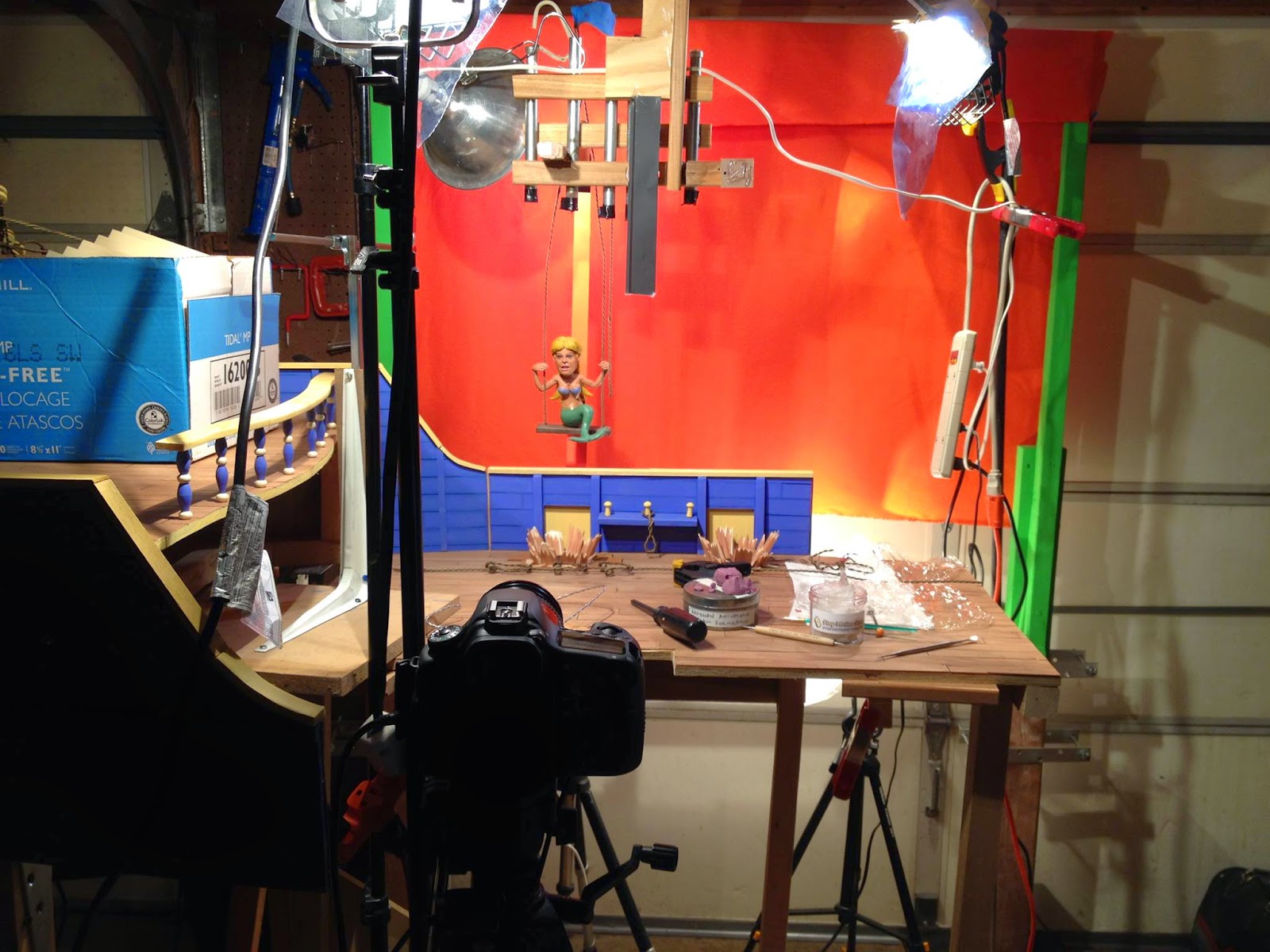 Here's the mermaid. She is seen for only a few seconds in the film as a drunken mirage by Ruble. 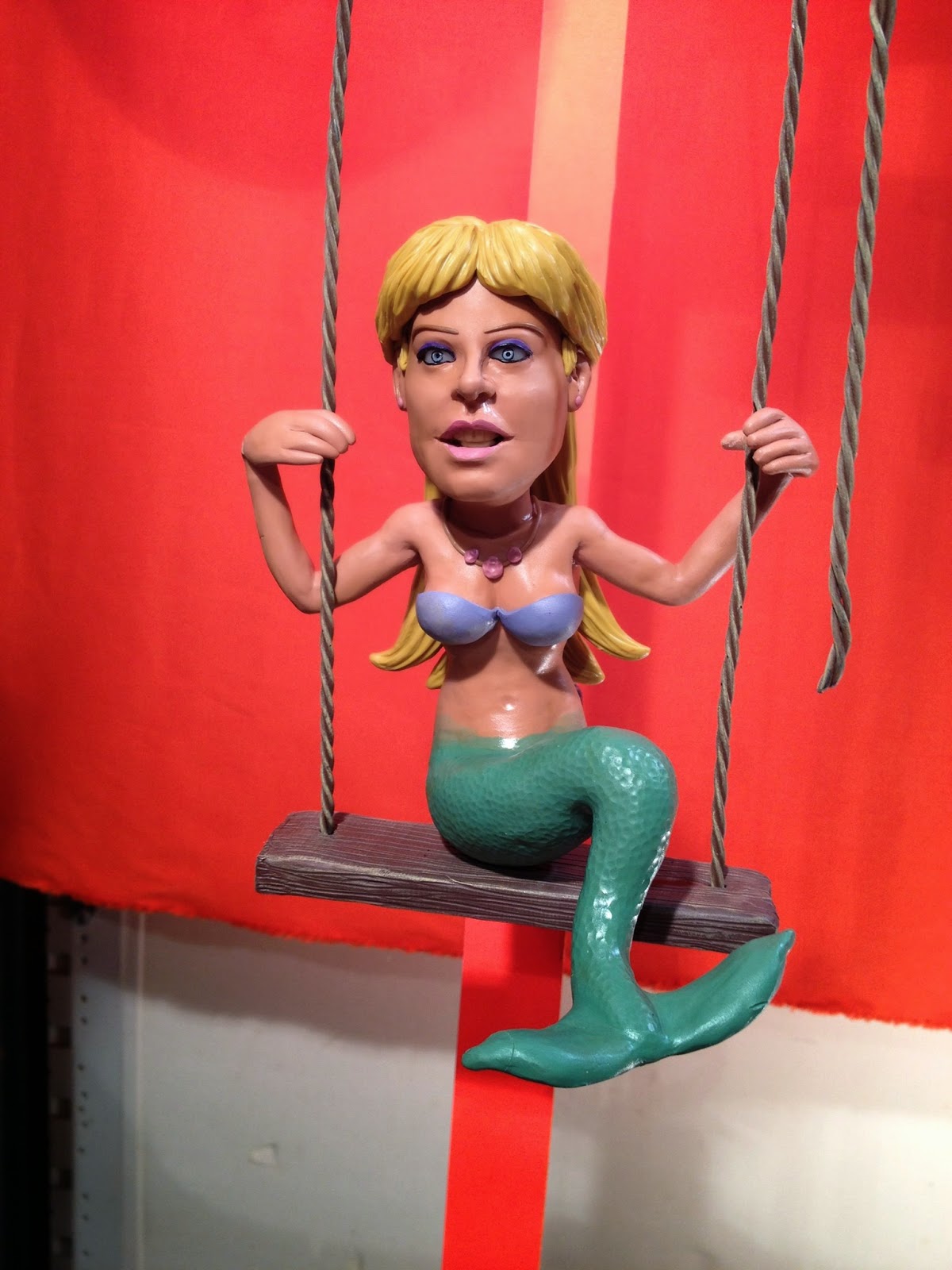 The audio is nearly complete as well as updated end title graphics. All the donators who helped finance the film were added. Newer sound effects of richer quality were plopped in too. Things are nearly done, just a few shots and I can reveal the full film.

Posted by Marc Spess at 9:10 AM No comments:

What do you do when you have green zombies and a green screen behind them? You buy some orange fabric and give it a try. 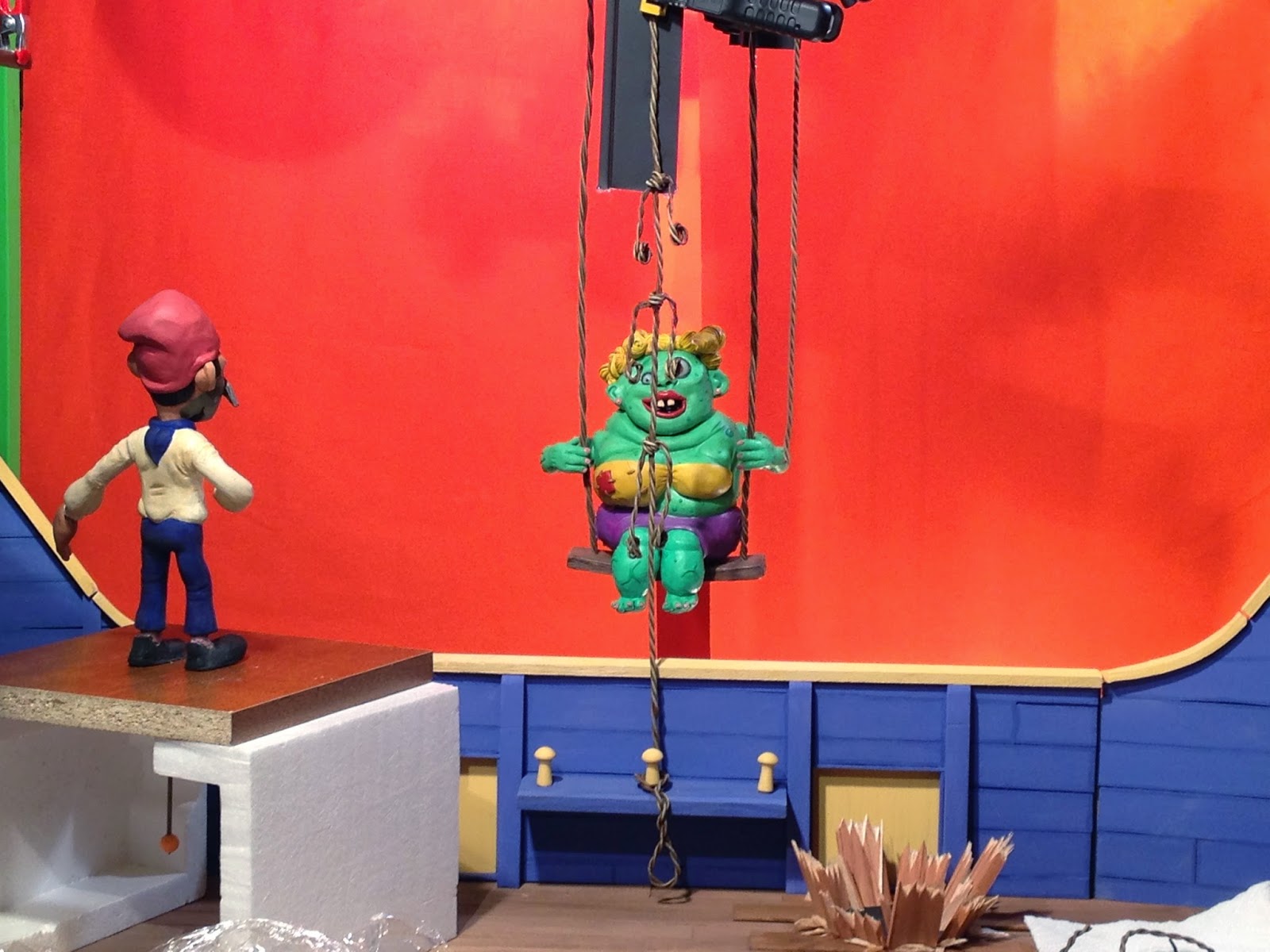 Unfortunately it is very hard to get a very clean and crisp edge around our zombie. Even when using pink as the color there is a fine line that is slightly visible.

After a few hours of testing and changing the lighting, I'm not sure if there is anything left that can be done to make a more crisp and fine edge. To back light the puppet will not be nice since the sun is meant to be above, to the left and behind the camera in these shots. I may have to settle for less than a perfect matte and go with what Sony Vegas allows. The other option is to try using the free Fusion program I downloaded to see what it can do. I may be able to compose the shot in it and then import it back into Vegas.

Posted by Marc Spess at 8:20 PM No comments:

Setting Up the Next Scenes 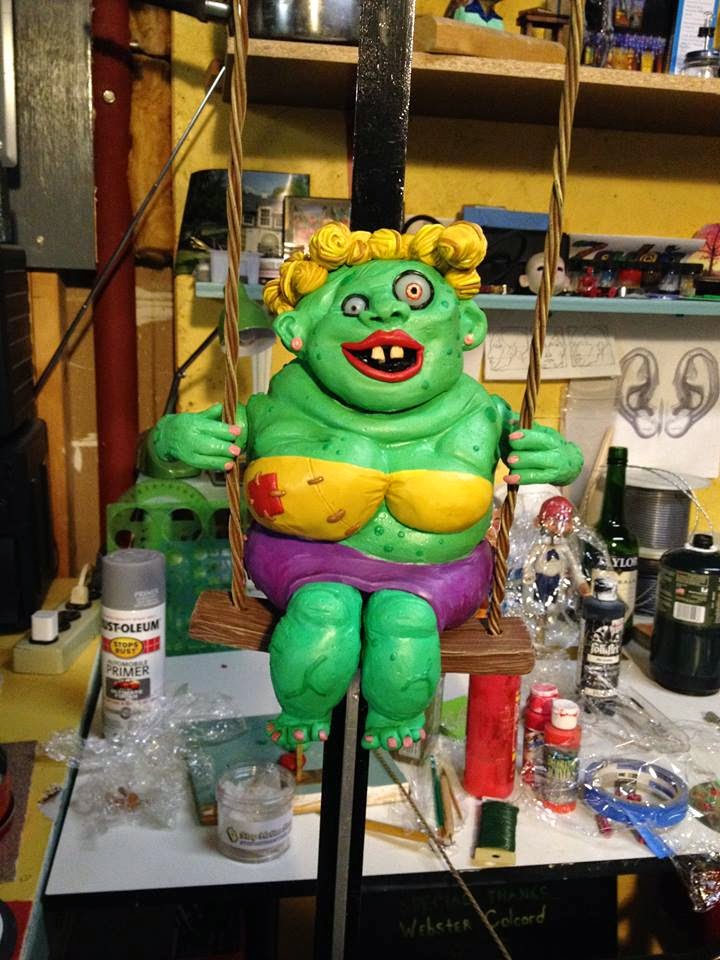 She is really as naturally beautiful as she seems.... I'm getting ready to set her up for her shots in the film. I'm hoping she will work with the green screen behind her. Otherwise I will need to change to blue or maybe orange. After shooting a test I will know.

The rig (made by Mike Weldon) in the rear is on a tripod so I can animate her lowering behind the set.
Posted by Marc Spess at 10:34 AM No comments:

Another Shot in the Can this Weekend 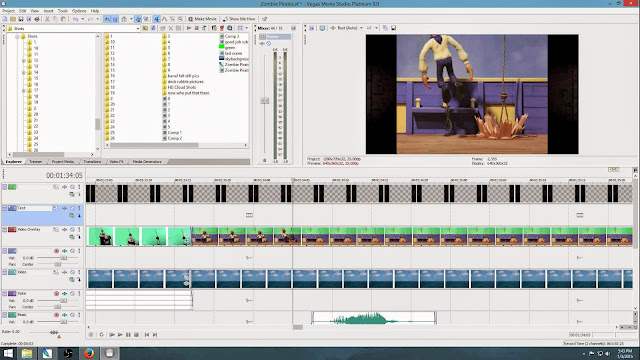 Ruble has flown once again in another shot. This time from right to left as the canon crashes down through the deck. The flying rig worked great, but it didn't fit on the left side of the deck. Removing one of the set walls was all it took. A couple of camera bumps (I had to climb over it to get some wire cutters) and a broken nylon string were the only issues.

I've also worked in some music from Kevin MacLeod since I don't have money for a musician. His songs actually worked into the film really well.

A few more touch-ups were done to make the old footage and new footage work together. Since my old camera captured 640 by 480 TIFF images (we're talking from 7 years ago) and the new camera captures full HD, the sides of the images were sometimes different in the editing timeline. A pirate map altered to create two dark side bars created an even image size throughout.

I altered the end credits to read better to the eye and also got After Effects version 7 to work on my new Windows 8 machine. It worked well enough to alter the beginning title to read "Zombie Pirate Tales" as opposed to "Zombie Pirates".

Things are getting so far along that I am really excited to share the film. But....as everyone knows, you have to be patient if you're a stop motion film maker. Things take time and that's all there is to it.
Posted by Marc Spess at 3:54 PM No comments: